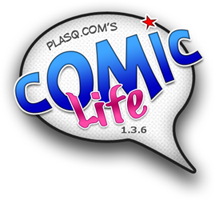 Plasq has been creating some excellent applications for Mac and recently released Comic Life for Windows too. Comic Life is an application for professional comic artists as well as for individuals who want to have some fun by creating comics and albums of photographs of their families and friends. It comes at a price tag of $29.95 for the deluxe version and $24.95 for the standard version.  You can also download a free 30 day trial from Plasq’s web site. I was impressed by the Mac version of Comic Life before it was released for Windows. Is the Windows version equivalent to the Mac version? Now, let’s get started on it’s review.

First of all the Setup icon of Comic Life is simply ugly. The setup icon is the first impression the user makes of an application. The setup too wasn’t any better. Installation took almost a couple of minutes on an AMD X2 3800+ based computer. When launched, a splash screen is displayed before the application appears. The splash screen is quite impressive, I must say. The User Interface (UI) of the application is quite beautiful. 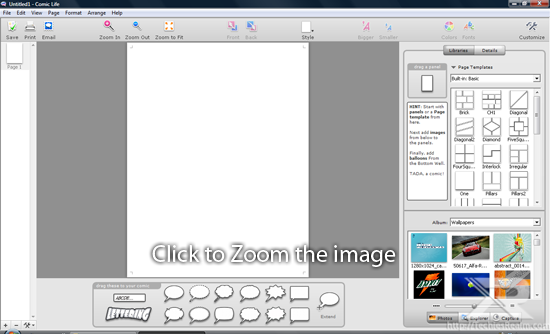 It’s similar to the Mac version. The icons are beautiful. The only difference I noticed is that the Windows version doesn’t have smooth Clear-Type fonts on the icon bar and it also had the menu bar. The menu bar takes away a lot of beauty from the application. Colour chooser and font dialog boxes proved to be another eye sore. Plasq should have avoided the menu bar and those dialog boxes could have been made beautiful. Overall the UI is quite impressive unlike the usual crappy UI software developers dish out to Windows users.

Comic Life is very easy to use and understand. It didn’t took me ages to understand how to use this application. You can choose the layout from the given templates and everything works by dragging and dropping on the page. You can easily select background colour from the Style menu. The Style menu also displays styles for the object selected on the page. Colours and fonts can be changed easily using the buttons on the icon bar. You can also customize the icon bar using the customize button. The customize Window is also very beautifully designed.

Comic Life for Windows is quite an impressive application. The simplicity and the UI (well most of it!) of this application makes it the best application in this category. Anyone (including myself) can now be a comic artist! I hope Plasq does away with the menu bar and applies changes as suggested above and that will further increase it’s ratings. The price tag is also justified as the application is worth every penny. I give 4/5 to Comic Life.

EDIT- We are giving away a deluxe version of Comic Life.  Both Windows and Mac users can participate. Check out this post- The Techies Realm Comic Life Giveaway