If you were wishing for live streaming of Kirtan from Golden Temple, Amritsar then this is the article for you! The SGPC has mentioned the method on their website itself.

Here’s the tutorial on how to do it:

Now you can listen to the live Kirtan at 16kbps. 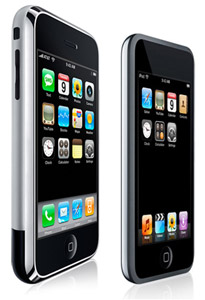 Apple, on Tuesday, announced the third generation of OS for the iPhone and iPod Touch. OS 3.0 is loaded with many features, many of which should have been there in the first generation itself. Here are the features that matter in the new OS 3.0:

A Chinese blog has claimed that Apple is working on a 15 inch version of MacBook Air and said that more information on this model will be available in the second half of the year.

Translated from Chinese by Google Translate, the recent entry on Apple.pro said, “It is understood that Apple is producing more than the current MBA size MacBook Air (15-inch?).” (Apple’s current MacBook Air, of course, ships with a 13.3-inch display.)

“Core architecture will use Intel processors, the latest…from the current ultra-low voltage processor ‘Core 2’,” the report claims. “[This will] make a stunning ultra-portable suitable for the older poor eyesight.” 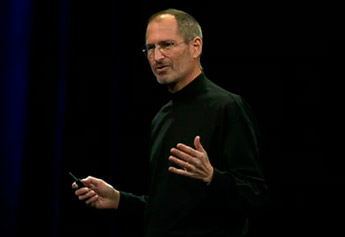 Steve Jobs has decided to take medical leave until June this year. Contradicting earlier statements from Apple, CNBC has reported that Tom Cook will be the acting CEO in the absence of Steve Jobs. As per reports,  Apple’s shares plunged by 7 percent after the news appeared.

Here’s the statement issued by Apple Media Advisory for the Press:

I am sure all of you saw my letter last week sharing something very personal with the Apple community. Unfortunately, the curiosity over my personal health continues to be a distraction not only for me and my family, but everyone else at Apple as well. In addition, during the past week I have learned that my health-related issues are more complex than I originally thought.

In order to take myself out of the limelight and focus on my health, and to allow everyone at Apple to focus on delivering extraordinary products, I have decided to take a medical leave of absence until the end of June.

I have asked Tim Cook to be responsible for Apple’s day to day operations, and I know he and the rest of the executive management team will do a great job. As CEO, I plan to remain involved in major strategic decisions while I am out. Our board of directors fully supports this plan.

I look forward to seeing all of you this summer.

Well, the good thing is that Jobs is looking forward to see everyone in June. Techies Realm hopes to see Steve Jobs getting well soon & wishes him good health.

Yes, it’s true! You can now get Rs. 6000* off on Apple iMac under exchange offer. You can exchange your old laptop, PC or even a TV to get the discount. Well, Rs. 6000 is not a huge discount on the iMac but something is better than nothing. So if you were planning to buy an iMac then go ahead and buy it now. 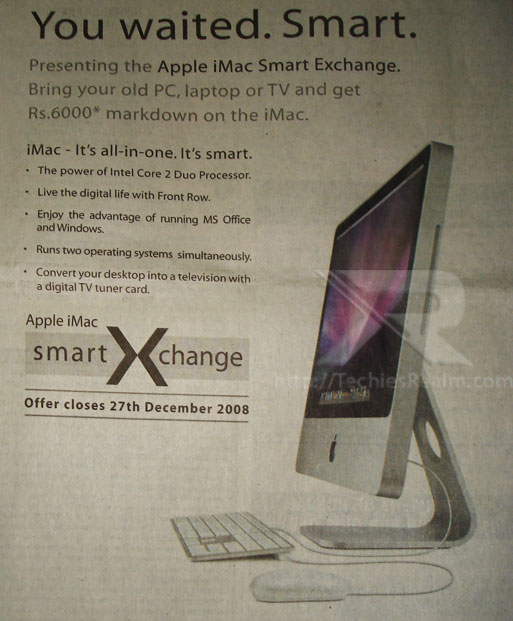 Already got an iMac under this offer? Post your experience in Comments.

As I noted earlier this week, I’ve begun using a MacBook (the basic white model) and keeping a log of my experiences. Because this system has a mere 1GB of RAM, I was curious to get a sense of how thrifty OS X Leopard is when it comes to memory usage. I was especially curious to see how Leopard compares to Vista. Windows Vista used roughly 2% more than its Mac counterpart running the same set of tasks […]